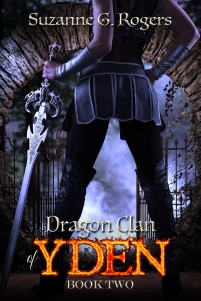 As Jon’s formal magical training begins, his budding romantic attraction to Kira jeopardizes his relationship with Brett. At the same time, the Dragon Clan is bringing the Earth-born children of Yden’s wizards back home. Unfortunately, the Fox Clan has also been recruiting these teen wizards for its own sinister plans. The mysterious Guinn of the Fox Clan is searching for a weapon known as the Portal Key and is more than willing to kill for it. Jon becomes increasingly desperate and reckless in his quest to thwart the Fox Clan, but he discovers—too late—his enemy is closer than he thinks.

Dragon Clan of Yden (Book Two of the Yden Trilogy) is available at your favorite bookstore HERE. Now available in paperback!

He passed into a mossy clearing dotted by several mature fruit trees and sculptures of fairies. Focused on an intricate sculpture of a brownie, Jon nearly smacked into a strange kid.

The boy, perhaps eighteen, was bare-chested, muscular and gripped a six-foot long staff. “State your Clan and your business.”

“Your Clan and your business,” the boy repeated, brandishing the staff.

He glanced over his shoulder to check Sela’s progress and suddenly found his legs swept out from under him. Jon landed on his back with a loud thud, wincing from a stinging pain across his calves.

“Dude, what’s wrong with you?”

The kid responded by rotating the staff around and around like an incoming helicopter blade. Jon scrambled to his feet, leaving his duffle bag on the ground. From somewhere behind him, Sela gasped. His attention riveted on the weapon, Jon held up a warning hand.

“Stay there, Sela. This guy is seriously nuts!”

The wooden staff whooshed toward Jon’s head and he jumped back out of reach. Unfortunately, he stumbled over his duffle bag and sat down hard. The stranger dissolved into mocking laughter.

A nearby fruit tree provided Jon’s sister with handfuls of juicy ammunition. Her aim was wide, but the incoming missiles made the teen duck. Jon seized the opportunity to tackle his assailant to the ground. He wrestled the staff away, burned it with the flames shooting from his fingertips, and flung the seared wood onto the gravel path.

“Stay down, punk, or there’s more where that came from,” Jon said.

The kid raised his hand and Jon noticed his clan ring — too late. Jon flew backward, as if yanked by an invisible elastic cord. He twisted in the air and slammed face-first into a stone sprite. As Jon spat blood from a cut inside his mouth, the stranger advanced.

“More of what, lightweight?” he sneered. “Seems to me like you got nothing.

What Reviewers are saying:

“I highly recommend Children of Yden as a must read but I would advise readers to get hold of The Last Wizard of Yden and read that first. A standing ovation for a five star read and a gifted author.” – Ellen Fritz, Books4Tomorrow

“ It is a solid tale good for children, young adults, and adults alike, readers will find themselves hoping Dorsit shows up at their houses with a clan ring and whisks them off to Yden to see the magical landscape and cool creatures that seem to abound.” Sarah E.B., Ind’Tale Magazine

One thought on “Dragon Clan of Yden (Book Two)”