When I received the publishing rights back to a short story entitled Minna & the Valentine, the project went on a shelf for a long time…until now. I’ve rewritten the tale, doubling the length, and I’m ready to release it again.

Blurb: After dragon jockey Wynn Westerfield loses his career, health, and wealth due to a wizard, he forbids his daughter, Minna, from studying magic. Although she manages to carry on secretly, her life becomes even more of a struggle when her mother dies. On the brink of adulthood, she’s offered the chance to track down the wizard responsible for her misery. Unfortunately, she’ll be forced to reveal her powers to the world.

Evan Valentine has attended a prestigious magical academy on scholarship, although he’s cleverly managed to conceal the fact from everyone. He’s on the fast track to success—until he discovers he owes a debt that can never be repaid.

Minna and Evan don’t realize it yet, but their destinies have been intertwined for years. Once the truth is known, they’ll be forced to choose between revenge…or each other.

I’m proud to announce the release of my third and final Yden novel, Secrets of Yden! 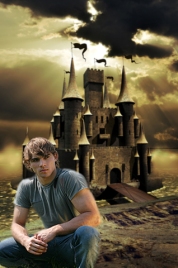 Blurb: As Jon Hansen begins his senior year in high school, he and his friends are focused on the future. Unfortunately, a past skirmish on Yden is still having repercussions. Bailey of the Shark Clan is out for revenge, and he may have secret support in the Executive Council. Worse, time is stopping on Earth for increasingly long intervals, and only Jon’s ankh sets him apart. An unstable portal is the cause, but his search for answers uncovers an ancient prophecy that seemingly spells his doom. Can Jon repair the hole in the universe before time stops forever, or will he have to sacrifice himself to save the world?

As Ty and his five friends zeroed in on a drama student with purple hair, Jon strode over to intervene. “Cut it out, Ty.”

“Bug off,” Ty replied. “Who elected you sheriff?”

“There are other ways to have fun. Give it a rest.”

“Everything okay, Jon?” Fred called out.

Ty held up his hands in defeat and backed away. “It’s cool.”

The confrontation over, Jon waved Fred off. With a grin, Fred scooped up a football and threw a long spiral pass. “Heads up, Hansen!”

For a moment, Jon thought maybe he was having trouble with his depth perception, but it was more than that. Everything and everyone around him was frozen in place, as if he were a patron in a wax museum. The football hung in space. The ocean waves had stopped, mid-crest. A seagull was poised overhead, midflight. A sandfly hung in the air right in front of Jon’s face. The absence of noise pressed in on his eardrums and jangled his nerves. It became so unbearable, he nearly screamed.

“Whoa,” he said, staggering backward. His eyes grew wide with panic as he searched the faces around him. Jon climbed on top of a flat rock and scanned the horizon for movement. He shivered with the realization there was none to be seen…

And then, as abruptly as time had stopped, it began again.

Secrets of Yden is available in all formats at Astraea Press, and for the Kindle at Amazon. Coming soon to other outlets.

The adventure begins with Book One, The Last Great Wizard of Yden.

For his sixteenth birthday, all Jon wanted were the keys to the family car. Instead, he got a lousy magic ring.

The children of Yden are coming home, and it’s time to choose sides.

Available for the Kindle at Amazon, for the Nook at BN.com and in all e-formats at Astraea Press. Now available in paperback too!

New release by author Colleen Connally! If you like Gothic and/or historical romance, this is for you…

Only love can heal a heart betrayed…

Harriet Burke has long been haunted by a family scandal. Abandoned by her mother as an infant, she has grown up in the shadows of the events that led up to that scandal. But all changes when she meets the future Viscount of Daneford. The dashing young Lieutenant Arthur Hammett defies his grandfather. Professing his undying love, he proposes to Harriet. Harriet quickly learns that all is not what it seems. Secrets, lies, and betrayal shatters Harriet’s life, leaving Harriet little choice. She has to begin life anew…

They were destined to be together but fate has other plans…

Lord Arthur Daneford made a rash decision years ago that cost him greatly…his biggest regret. Now, though, his past has reemerged. Chilling information has been called to his attention that Harriet’s life is endangered. He will stop at nothing to ensure her safety, but will she accept his help before it’s too late?

Harriet Burke has been cursed or so says her grandfather. In her youth, a gypsy’s blessing gave Harriet the ability to disregard the boundaries of death. Lord Arthur believes it is total nonsense, but he cannot deny there is no explanation for her knowledge. Haunted by visions of wrongs once done, Harriet fears there will be no escape.

Available for the Kindle on Amazon HERE, and for the Nook at BN.com HERE, or on Smashwords in all formats HERE. If you crave an old fashioned paperback, you can get it on Amazon HERE.  Enjoy!

Today is release day for my fantasy novel, Tournament of Chance.  😀  Thanks for celebrating with me. ~ S.G. Rogers

When a beautiful commoner enters the Tournament of Chance archery competition, her thwarted victory sparks a revolution in the oppressive kingdom of Destiny. Although Heather never believed the legends about the restoration of Ormaria, after three shape-shifting Ormarian wizards awaken from a long magical slumber, she joins their perilous quest to regain the throne. Heather battles vicious predators and angry trolls to free the wizards’ magic, but at a horrendous cost. She is unexpectedly torn from the arms of the man she loves and hurled back in time to fulfill a prophecy not yet written. The ensuing maelstrom tests Heather’s survival skills, wits, and endurance. Will she become an unwritten footnote in history, or can she trust the magic to lead her back to her one true love?

“It isn’t wise to tell people too much incredible information at once,” Shimmer said. “I told them what they needed to know to keep them from rushing into an armed conflict they couldn’t win. They’ll learn the whole truth in due course.”

Heather cocked her head. “And this quest to Boravagg? Have you told me only what I need to know?”

Before Shimmer could answer, Dane, Manny, and Joe appeared. The sleek muscles of Dane’s bare arms and torso glistened from his recent swim. Blushing, Heather averted her eyes.

“I wish to be completely honest, Heather. This venture is horribly dangerous, potentially fatal, and with an uncertain outcome,” Shimmer said. “Knowing that, do you want to change your mind?”

Now available in all e-formats from Musa Publishing HERE. Also available at Amazon. Coming soon to BN.com and wherever fine e-books are sold.