The InD’Tale Magazine RONE Awards continue! It’s Week Four, and I need your votes for my two nominated entries, Larken (Category: Novella) and Dancing With Raven (Category: Young Adult: Paranormal). Go HERE to vote (you must create a free account first), and I thank you for your support! ~ S.G. Rogers

The sole survivor of a train accident, young Larken Burke is dubbed the Miracle Orphan. Four years later, however, her life is far from fortunate. Because of her emotional and physical scars, she believes she’s un-marriageable. With little hope for the future, she agrees to wed a gentleman she’s never met. Unfortunately, his aloof manner proves difficult to take.

Marked by romantic tragedy and the loss of his brother, Brandon King has forsworn marriage. Obliged to take in a ward, he advertises for a mail-order bride to raise the boy. Since the union is to be a marriage in name only, his criteria are youthful age, a certain level of intellect, good breeding, and that the girl shouldn’t be so ill-favored she would embarrass him in society. To his dismay, he gets more than he’d bargained for.

Will it take a miracle for Mr. and Mrs. King to fall in love, or is their marriage another accident waiting to happen? 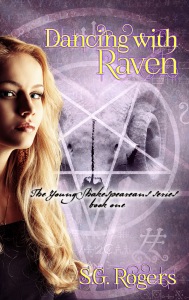 The Shakespearean Institute of London is the most powerful, prestigious, and top-secret demon-hunting organization known to mankind…and they want American Tori Moss dead before she turns eighteen. Demons are pouring into her hometown of Los Angeles as they await the end of the world, and she doesn’t know whom to trust or where to turn. After a handsome English boy enrolls in her performing arts school, Tori’s life takes a turn for the deadly. Sometimes in the fight between good and evil, the enemy of your enemy is your friend. And sometimes, you’re on your own.

2014 RONE Awards Week One has begun!  Duke of a Gilded Age has

been nominated under the category of Young Adult, and I need your vote to make it into the finals. Voting is only open until March 16th, so don’t wait! Go HERE to vote. As an extra incentive, if you leave a comment, below, letting me know you’ve voted, I’ll enter you into a drawing to win your choice of ANY of my e-books in Nook or Kindle format (go HERE for the full list). I’ll draw the winner on March 18th, before noon EST. I cannot win without YOU, so please, please vote! ~ S.G. Rogers

When I am looking for a new book to read, I look at the cover first, don’t you?  It’s human nature, I suppose, to be drawn to certain images. In my experiences with

smaller, independent publishers, the design of a book cover has been a collaborative process between me, the author, and the cover artist.  An author may specify what he or she might like to see on a cover, and is encouraged to browse the royalty-free images available at any one of a number of online companies for suggestions.  The big publishing houses have a larger budget for this sort of thing, and will often design custom covers with images you won’t find anywhere else. Nevertheless, the indie and small press publishers do a very nice job trying to please their authors and create a cover that will help market the book.

The Ice Captain’s Daughter was my first crack at designing my own cover.  Admittedly, I got lucky with the image I chose, but it took many long hours to find it.  I wanted to have a girl in a fancy dress suggestive of the era (late Victorian). The peachy pink color was pretty, and set off nicely by the cloudy gray background. Since Jillian Roring’s father is Norwegian, the girl’s light blonde hair was appropriate.  Although the story isn’t fantasy, I was drawn to the fanciful feeling the image suggested.  I also liked the little crown; although Jillian isn’t royalty, she is nicknamed Ice Princess.  I was happy with the idea of the cover as less a realistic portrayal of the heroine and more the idealized way Mackenzie Logan views her.

Using Photoshop, I made some necessary adjustments to the image, dropped in the Victorian frame, and added the titles.  When it came time for the cover reveal, I was apprehensive. What if what appeals to me doesn’t appeal to anyone else? Fortunately, the response amongst my friends and acquaintances was strongly positive… but the proof would be in the sales numbers, would it not? After The Ice Captain’s Daughter was published, sweet relief flowed through me at its ranking.  I have a screenshot from Amazon that shows it reached #8 in Historical,#9 in Historical Romance, and #24 in Teens, and sales have remained strong since then.

Yesterday, I received a lovely email from InD’Tale Magazine informing me the cover had been chosen to com

pete in their Creme de la Cover Contest!  If you like The Ice Captain’s Daughter cover, I encourage you to vote for it HERE before next Monday.  You’ll have to subscribe to the online magazine before you can vote, but it’s free.  InD’Tale Magazine comes highly recommended; it contains articles, columns, and reviews of books by category.  Also, the graphics are splendid.  I especially like the turning pages with the accompanying sound effects!

Now, while working on my next historical romance, Duke of a Gilded Age, I’ve been designing the cover at the same time.  Ironically, the success of The Ice Captain’s Daughter has made the process that much more difficult! Expectations will be high, but I’m determined to clear the bar.  And I love the story; it’s a full length novel set in 1890.  Currently, my characters are on a sinking ship in the middle of the Atlantic Ocean!  I’d best get back to the writing cave, but if you’d like to vote for my The Ice Captain’s Daughter cover I’d appreciate it.  ~ S.G. Rogers

The March issue of InD’Tale Magazine just came out, and the reviewer gave my fantasy adventure novel Children of Yden a marvelous review.  In fact, my book was awarded the Crowned Heart for excellence!  The full review is HERE, but the following is a quote:

“In a very Percy Jackson meets wizardry sort of tale, this book goes from the high fantasy adventure of the first book to more collecting wizards and fighting for good in the sequel. Due to the large number of characters and events alluded to but not explained or reintroduced in the second book, readers should definitely read the first book before picking this one up, but it will be worth the time. It is a solid tale good for children, young adults, and adults alike, readers will find themselves hoping Dorsit shows up at their houses with a clan ring and whisks them off to Yden to see the magical landscape and cool creatures that seem to abound… Well done!”

A big thank you to InD’tale Magazine, from me!

Jon materialized on Dragon Isle beach, far enough from the tree house not to be heard. If his grandfather had retired early

, the noise of a transport near the vanyean tree might disturb him. Yden’s two moons cast some illumination, but he knew the route so well he could have found his way in the dark. In addition, Ophelia’s glow cast all the light he needed.

As he trudged up the beach and into the garden, a crushing sense of loneliness descended. I wish Casey and Fred were here. They could dig a fire pit in front of the bungalow and have some late night laughs. But there wasn’t a fire pit and Jon had no one on the island to talk to. He couldn’t envision yukking it up with Max, especially after the way he’d zeroed in on Brett tonight.

The heat-­sensitive statues were still radiating the warmth of the day and glowed eerily in the dark. Suddenly he saw a human
shape dart past the dragon statue. At the same time, Ophelia started to sting. Jon crouched behind a tree and counted several more bodies passing by — five in all. The intruders were heading for the vanyean tree, but Jon knew a shortcut. He slipped through a break in a hedge and practically flew to the bungalow. Max was snoring, but he woke with a start when Jon clapped a hand over his mouth.

“Shhh,” Jon whispered. “We got trouble outside. There are five hostile wizards in the garden and they’re heading this way.”

Children of Yden (Sequel to The Last Great Wizard of Yden)

Available for the Kindle at Amazon, for the Nook at BN.com and in all e-formats at Astraea Press.