There’s something about a cave that sparks my imagination.  I’m not talking about a tiny, condo-sized cave here.  I’m thinking Park Avenue penthouse quality caves… the kind you’d walk through with your mouth hanging open in awe.

My parents took me to Carlsbad Caverns National Park when I was a kid and I don’t think I ever got over the memory.  Who knew you could find that kind of beauty underground?  I love the idea of stalactites and stalagmites being formed over time, and how minerals in the walls reflect light in different colors.

On my to-do list is to visit a lava tube… one of the long cave-like tunnels formed when a volcano erupts. Did you know some of these lava tubes (ie: Kazumura Cave, Hawaii) can span over 40 miles long? 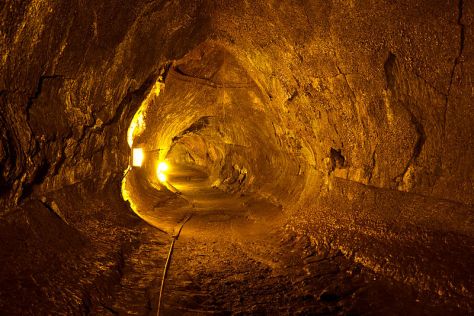 I frequently feature caves and underground lakes in my stories.  In my upcoming release, Tournament of Chance (Sept. 28), my characters hike through lava tubes on a danger-filled tropical island.

Have you ever seen a natural phenomenon that seemingly radiated magic?

When a beautiful commoner enters an archery tournament with a royal title as the prize, her victory sparks more than a revolution in Destiny. Although prophecy says the ancient kingdom of Ormaria will be restored at the right time, Heather is far too practical to believe it.  After three Ormarian rulers from the past awaken, however, she realizes the legends are not mere fairy tales.  These Ormvalder wizards, capable of shape shifting into dragons, enlist Heather’s help in a quest to restore their full powers. Despite her initial animosity, Dane Ormvalder manages to claim her heart. Heather successfully unleashes the Ormvalder’s magic, but at a horrendous cost. She and her friend Joe are sent back in time to fulfill a prophecy not yet written.  A seemingly unending wave of magic will propel the two forward until balance is restored.  Will Heather be forced to sacrifice everything, or can she follow the magic to her own destiny?