Included in this box set are:

Poisoned by an enemy, a young warrior struggles to find an antidote before she succumbs to enslavement. At the same time, she’s desperate to save Dorsit, a Leopard Clan wizard whose youth and magic has been stolen by a murderous wizard on a rampage. As Kira’s homeland is invaded by bloodthirsty legions, she flees across the country in a bid to reach the Mirrum Mountain nymphs and a legendary cure. Hunted by shadow hounds, an army of Cyclopes, and an evil jinn, will her wits and skill as a warrior be enough to survive?

Jon Hansen always thought his father’s tales about the magical planet of Yden were fiction. When his father is kidnapped by an evil wizard, however, Jon is forced to dig deeper. His investigation uncovers magical artifacts that will unlock another dimension—if only he can gather his courage to make the journey. On his quest to Yden, Jon encounters wizards, Cyclopes, and a warlord who seem to want him dead. Fortunately, he’s got friends by his side, as well as the ability to draw things to life. Can he and his friends defeat the most evil wizard the magical world has ever known, or will Jon become the latest addition to the Wolf Clan wizard’s gruesome collection of trophies? 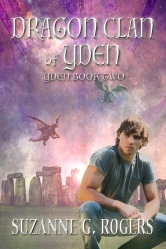 As Jon’s formal magical training begins, his budding romantic attraction to Kira jeopardizes his relationship with Brett. At the same time, the Dragon Clan is bringing the Earth-born children of Yden’s wizards back home. Unfortunately, the Fox Clan has also been recruiting these teen wizards for its own sinister plans. The mysterious Guinn of the Fox Clan is searching for a weapon known as the Portal Key and is more than willing to kill for it. Jon becomes increasingly desperate and reckless in his quest to thwart the Fox Clan, but he discovers—too late—his enemy is closer than he thinks.

As Jon begins his final year in high school, he and his friends are focused on the future. Unfortunately, a past skirmish on Yden is still having repercussions. Bailey of the Shark Clan is out for revenge, and he has secret support on the Executive Council. Worse, time is stopping on Earth for increasingly long intervals, and only Jon is unaffected. Unfortunately, the search for answers uncovers an ancient prophecy that seemingly spells his doom.

and if you enjoy it, don’t forget to leave a review!