In the wild and untamed Uncharted Region, the greatest danger is falling in love. 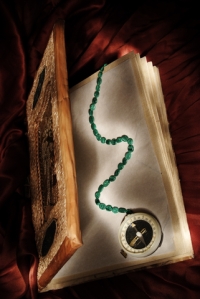 Princess Samantha’s magical compass will help her locate her long-lost brother, but only if she manages to escape her royal parents for a few weeks. When an unwelcome suitor comes to call, Samantha seizes her chance. She beguiles the prince into taking her north, intending to abandon him at her earliest opportunity. Unfortunately, his captivating good looks and charming manner present an unforeseen complication—especially when she is forced to accept help from the very man she has deceived.

To maintain his bachelorhood, handsome Prince Wills is not above

deception. Although reluctantly entangled in Samantha’s scheme, he vows to protect her…until a lie threatens to destroy their alliance.  Can his powerful attraction to Samantha overcome his mistrust?  And can they survive a dangerous quest to the wild and magical Uncharted Region?

Samantha hastened in the same direction Wills had gone, but her heart began to pound when she realized she was lost. Someone pointed her down the alleyway that led to the general store, but Wills had already left. Panic quickened her pace as she retraced her steps.

Halfway through the alley, two men blocked her exit. They’d followed her from the tavern. A sense of dread gripped her so tightly she found it hard to breathe.

“Well, looky here, we’ve got ourselves a little mouse,” one sneered.

His companion laughed. “More like a piece of cheese, I reckon.”

Samantha turned to find her retreat cut off by the other two. She dropped her pack to the ground but before she could reach for her sling, the scarred bandit rushed forward and held a knife to her throat.

“Your tall friend is just around the corner,” he murmured into her ear. “Call him.”

“Do it, or I’ll ventilate your windpipe.”

Samantha flinched as she felt the blade slicing into her skin. She knew if she called Wills, the men would kill him. She chose to die instead.

“Would that your hands burn with the strength of your evil,” she spat.

To add to your to-read list on Goodreads, go HERE.

6 thoughts on “Taming of the Shrew (Not)” 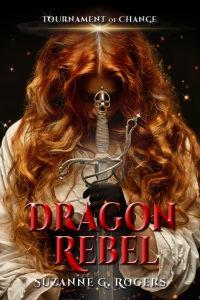